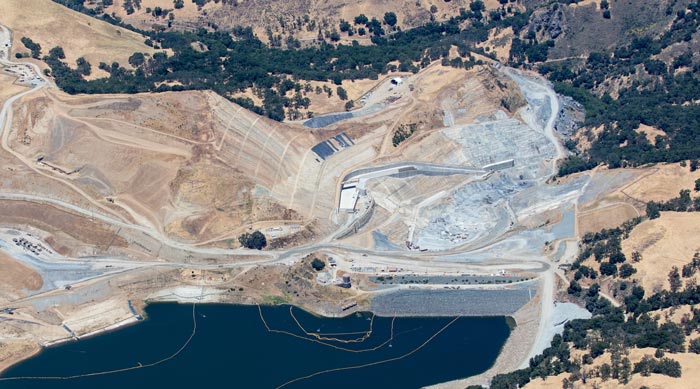 When completed in 2019, the Calaveras Dam will have been rebuilt from the ground up in order to remain seismically safe in case of an earthquake
By Dani Neiley

Located only 1,500 feet from the active Calaveras fault line in Santa Clara County, Calif., the Calaveras Dam could be in serious trouble if an earthquake were to hit. That’s why officials from the San Francisco Public Utilities Commission (SFPUC) lowered the water level of the Calaveras reservoir to less than 30 percent of its original volume in 2001 due to seismic concerns. But that reduction came at a price.

Calaveras Reservoir, impounded by Calaveras Dam, is the SFPUC’s largest drinking water reservoir in the local Bay Area. When it is full, it provides more than half of the Bay Area storage capacity for 2.6 million customers. The water supply is crucial during emergencies and times of drought, and with California in its fourth year of a record-breaking drought, the water is badly needed. The SFPUC was faced with an ultimatum: safety, or water?

They decided on both. The Calaveras Dam Replacement project began in 2011 as an effort to rebuild the existing dam to make it seismically safe. Upon completion of the $810 million in 2019, the Calaveras Reservoir will be back to its original storage capacity of 96,850 acre feet of water, or 31 billion gallons.

In April of 2016, a major milestone was hit: completion of the spillway, an important safety structure of the dam that leads from the reservoir to the Calaveras Creek below. The spillway is used to control excess water flow in the reservoir by releasing it into the spillway, where it then travels to the creek.

“The completion of the spillway is an important milestone for the new Calaveras Dam,” said Project Manager Susan Hou of the San Francisco Public Utilities Commission. “This incredible achievement represents all the non-stop, hard work day and night from our stellar project team, including the owner (SFPUC), designer (AECOM), construction manager (Black and Veatch), and contractor (Joint Venture of Dragados USA, Flatiron and Sukut).”

According to Harlan L. Kelly Jr., the General Manager of the SFPUC, “the spillway is the width of an 8- lane freeway. Tens of thousands of hours of work went into its construction,” he says. Pictures may be deceiving, making the spillway appear smaller than it actually is, but the spillway’s walls are 40 feet high. In total, 50,000 cubic yards of concrete were used to build the spillway, which is 1,550 feet long.

The project team built the spillway in three sections: the upper spillway, which collects flood water from the reservoir, the spillway chute, which is a 30% downhill slope, and the stilling basin, which slows the water flow before it is released into the creek. The spillway could not be built as a conventional linear structure due to the shape of the valley, making construction more challenging. As such, the spillway has a horizontal curve to minimize excavation into the steep left abutment hillside. The stilling basin at the bottom of the chute dissipates the energy of flow down the spillway chute to reduce its erosion potential, and protect the flora and fauna in the fragile ecosystem, before being released to Calaveras Creek.

“This spillway is a critical safety feature of the new Calaveras Dam,” said David Gutierrez, Chief of the California Division of Safety of Dams. “This massive concrete structure controls excess flows into the reservoir by releasing them safely through the spillway. The new dam cannot be completed without a spillway that is robust enough to protect the dam.”

In an incredible time lapse video on the SFPUC’s YouTube Channel, you can see crews move over seven million cubic feet of rock soil, along with the construction of the spillway, in the span of two minutes. The time lapse makes the work seem effortless, but the project team faced difficult construction challenges along the way.

Concrete placement on the spillway had to be done in the early morning hours because cooler temperatures were necessary for the concrete to set properly. Crews of laborers and concrete finishers would have a start time of 2 a.m. and work on placing 120-400 cubic yards of concrete before the temperature got too high. Crews also encountered different site conditions due to the geotechnical foundation conditions that affected the spillway and dam. In 2012, during excavation work, crews discovered ancient landslides in the spillway and dam foundation. Since the rock and soil material in these landslide masses was not suited to be in the foundation, it had to be removed and the area was backfilled with concrete, so it could be stable enough for the foundation of the spillway.

Although the difficult geologic conditions led to increased costs and schedule impacts, the project team worked to minimize the impacts as much as possible. Ultimately, a total of 100,000 working hours went into the construction of the new spillway, and work on the Calaveras Dam Replacement Project is now over 70 percent complete.

As for the future dam, construction is expected to begin in October and the project will reach final completion in 2019. Currently, crews are hard at work excavating and grouting the dam foundation in order to prepare it for construction. Upon completion, the future dam – including the spillway and outlet works – will be able to withstand a 7.25 magnitude Maximum Credible Earthquake on the Calaveras fault.

“We know that a major earthquake in the San Francisco Bay Area is only a matter of time, and that’s why we are making significant investments into our Hetch Hetchy Regional Water System,” said Ed Lee, the Mayor of San Francisco. “These investments will help increase our resiliency and help us withstand the effects of earthquakes, droughts, and other disasters.”

Dani Neiley is an Assistant Editor for American Infrastructure Magazine. She may be reached at
dani@penpubinc.com. 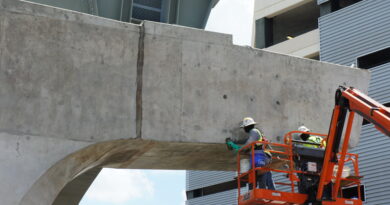 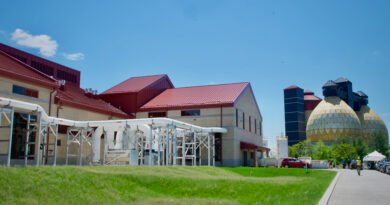 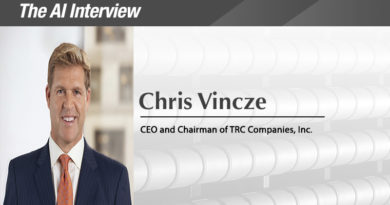