WASHINGTON (AP) — The Senate is set to move forward on a $10 billion water projects bill that includes $220 million in emergency funding for Flint, Michigan, and other communities beset by lead-contaminated water. Senators are scheduled to hold a test vote Monday on the bill, with approval expected later this week. The bipartisan measure would authorize 29 projects in 18 states for dredging, flood control and other projects overseen by the U.S. Army Corps of Engineers. The measure includes $100 million in grants and loans to replace lead-contaminated pipes in Flint and other cities with lead emergencies, as well as $70 million toward loans to improve water infrastructure across the country. It also includes $50 million to bolster lead-prevention programs and test water for lead in schools. 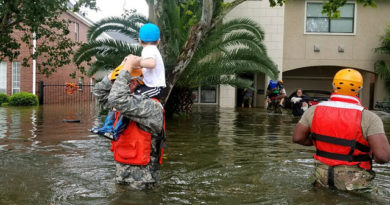 As Harvey’s waters rise, so do panic levels, rescuer says