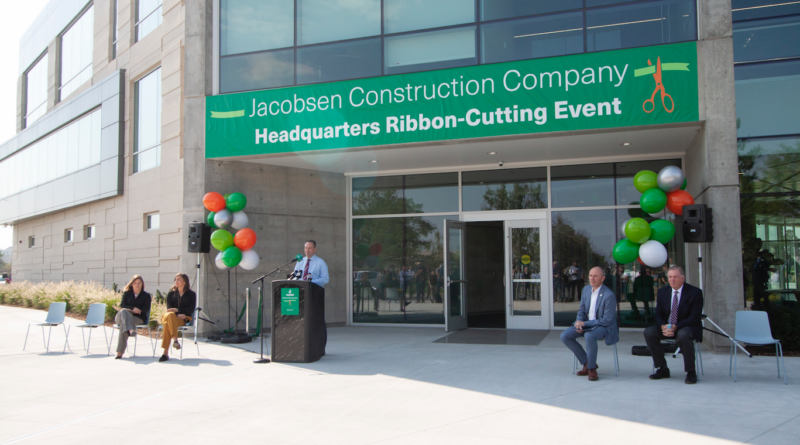 Jacobsen President and CEO Gary Ellis also spoke to employees and special guests gathered for the outdoor occasion, describing the company’s recently completed modern workplace at 5181 W. Amelia Earhart Drive. He called the building an investment in Jacobsen’s people, its future and its community.

“Jacobsen’s new headquarters is a tangible, powerful way for the company to chart its own path ahead and innovate and invest in its people and the community as never before,” Ellis said.

Jacobsen, a nearly $1 billion company with $2.1 billion of work in its pipeline, has a deep and far-reaching impact on Utah’s economic strength, due to the construction trade’s enormous impacts on supply chains, small business subcontractors, and community growth and development. With most of Jacobsen’s headquarters constructed during 2020, the building’s progress also served as a hopeful sign that the construction industry could help Utah’s resilient economy come roaring back to life amid the many pressing challenges of the pandemic.

That optimism for economic recovery has borne out very well in 2021: Utah’s unemployment rate (2.6%) is second lowest in the United States and Utah’s construction workforce (121,000) is currently larger than at any other point in history, showing that builders in this market are well-prepared to accommodate the Beehive State’s nation-leading population growth.

Governor Cox praised Jacobsen for its role in making that growth possible, noting that “it’s impossible to wander for long in the state of Utah without bumping into a Jacobson building.” He added that more than simply driving growth, he is grateful for Jacobsen’s commitment to building up a sense of place on every project it completes in the state of Utah and creating opportunities and financial prosperity for the company’s employees.

“What impresses me most about this organization is the way that they care about their own people, and their willingness to give back. This is one of the one of the few companies in the state that is entirely employee-owned, and has been now for many, many years. That’s a concept and an idea that I wish more companies would latch onto,” Cox said. “It’s truly remarkable and gives employees a sense of pride in what they do. And that certainly shows in the types of building, the quality of construction and the way that they care.”

Jacobsen’s new headquarters is located in Salt Lake City’s International Center business park — at the convergence of industry, manufacturing, air travel and hospitality. The chosen location signals the firm’s enthusiasm for this region of Salt Lake as a commerce hub — a fact not lost on the city’s mayor.

“I think it’s integral actually that your headquarters is here in Salt Lake City, and that it’s on the west side,” Mayor Mendenhall said. “And that really speaks to the commitment that Jacobson has made to invest in our capital city and create growing and new opportunities for the residents here.”

Mayor Mendenhall also described her excitement for the city’s fast-growing skyline and Jacobsen’s role in taking it to new heights.

“I look at the cranes out on the skyline of Salt Lake City, and I wonder what kind of new jobs and new growth and opportunities these buildings — and these homes in the multifamily housing style that are on the rise right now — are going to bring to our capitol city. What will our city look like in 10 years, in 20 years? And I believe partnerships with companies like Jacobsen Construction provide answers toward those questions,” Mayor Mendenhall said. “Jacobsen is spearheading many of these projects connected to the cranes downtown. And they will surely be here not only for 20 or 30 more years, but for that next century of growth.”

There are currently several ongoing Jacobsen projects that will re-shape communities along the Wasatch Front and throughout Utah for many decades to come. These include urban high-rises such as the Astra Tower (also known as Kensington Tower), Liberty Sky Tower and The West Quarter, the Salt Lake Temple and historic Temple Square renovation, and the new Primary Children’s Hospital in Lehi, as well as university campus buildings from Logan to St. George. Jacobsen will soon begin building the University of Utah Medical Education & Discovery Building, and recently completed the Mid-Valley Performing Arts Center in Taylorsville.

Mayor Wilson praised the recent completion of that Salt Lake County-owned cultural venue as “a great gathering place for the residents of Taylorsville and the region as a whole,” adding that she feels “proud to have worked with Jacobson on some really key county projects.”

“Thank you for your dedication, your vision, your commitment to our county, to our city and to this area,” she said.

Mayor Wilson said it was “really impressive to see the legacy of the company being build into this modern new building,” adding that’s worth taking a step back to think about how far Jacobsen has come during its century-long history in Utah.

“I think about 100 years ago — I’d love to hear the stories of the first days. I wonder what the leaders of this company, as they worked with community leaders at the time, were looking to build and what they might think about who we’d become,” she said. “And I think there’s an intentionality that we have to hold onto, and your company has done that.”

Designed to accommodate company growth, the 63,000 square-foot headquarters marks the first time in the firm’s 99-year history in which employees can go to work each day in an office built by Jacobsen, for Jacobsen. Ellis took a moment to reflect on this profound milestone in Jacobsen’s history.

“Today, Jacobsen’s people stand on the shoulders of giants: Generations of workers who never wavered from their passion for building the enduring communities made possible by their craftsmanship,” Ellis said. “With this beautiful new workplace, we are honoring and elevating the work of those who came before us and the community that we’ve called home for the last century.”

Jacobsen Construction Company, Inc. was founded in 1922 by Soren N. Jacobsen in Salt Lake City, Jacobsen is a 100% employee-owned, Employee Stock Ownership Plan (ESOP) company. With more than 600 employees, Jacobsen is consistently ranked as one of the top contractors in the country, as well as one of the nation’s Top 100 Green Contractors. For more info, go to jacobsenconstruction.com and visit Jacobsen’s Facebook, Instagram, LinkedIn and Twitter pages.