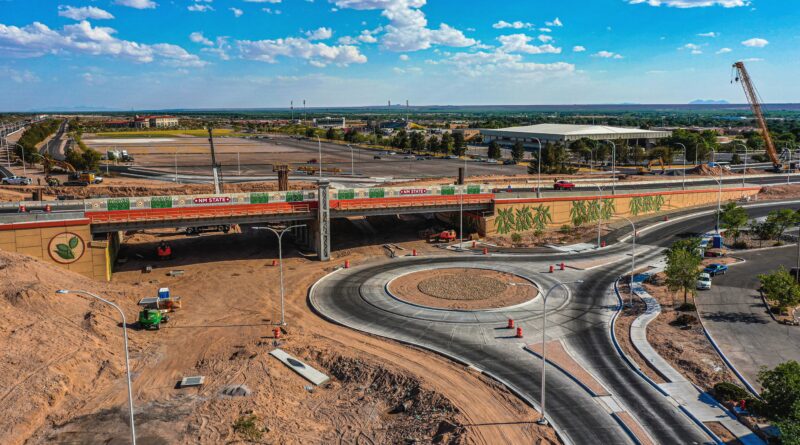 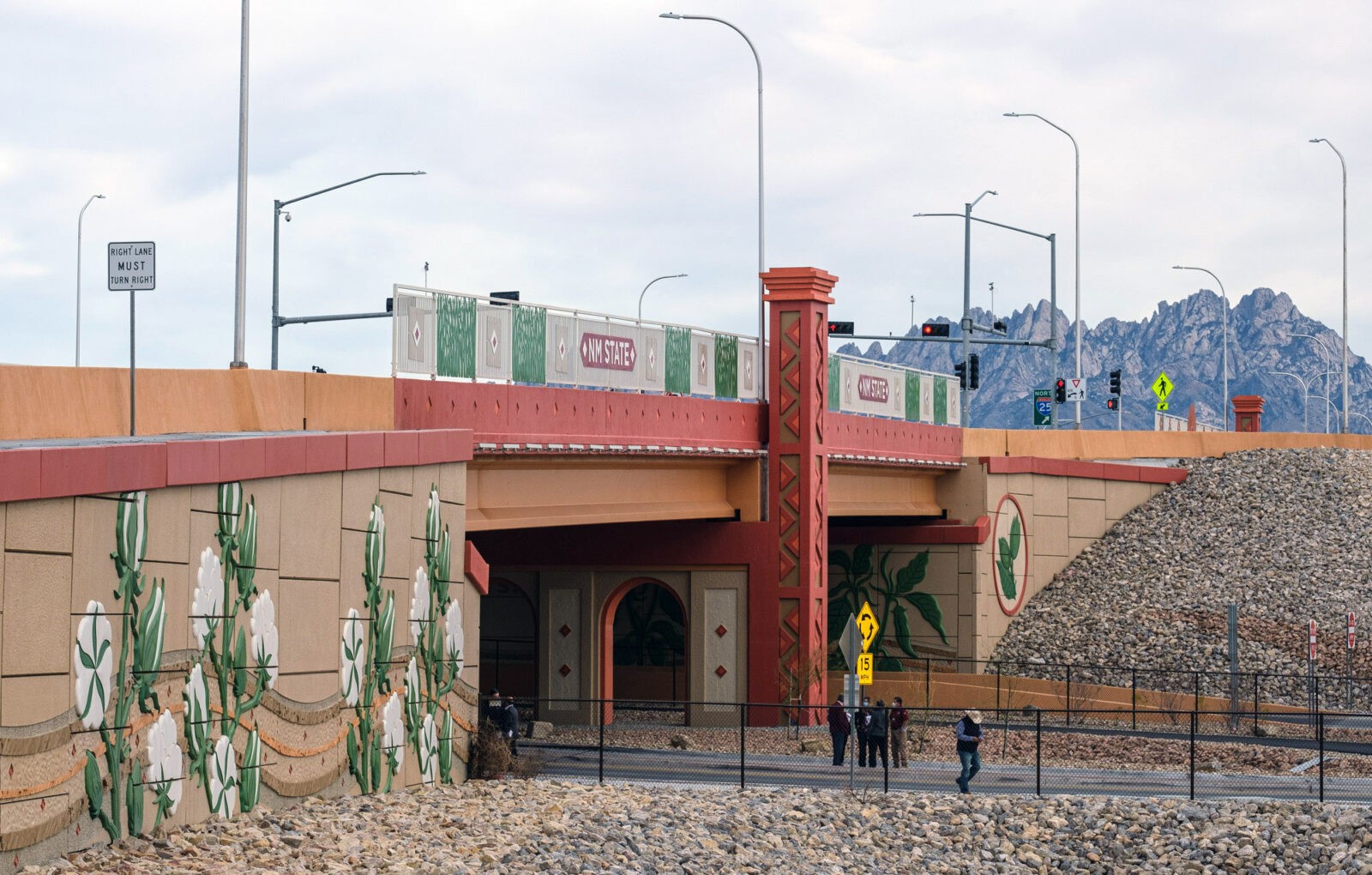 Congestion on the major New Mexico highway was becoming a major issue for commuters.

Interstate 25 in New Mexico is a key highway that runs through a multitude of cities, including Albuquerque, Las Cruces, Truth or Consequences, Socorro, Santa Fe, Belen, Las Vegas (N.M.) and Raton. The highway replaced U.S. Route 85 and measures up to 460 miles in total roadway.

However, over the years, I-25 began to develop safety issues near University Ave. near New Mexico State University (NMSU).

“The existing infrastructure was over capacity, and the existing geometry and traffic growth created safety issues,” said Trent Doolittle, District 1 Engineer for the New Mexico Department of Transportation (NMDOT). “Due to growth in the region the interchange would bottleneck into I-25, becoming a safety issue. This traffic volume would often double during special events, further increasing congestion.”

Thus, with the collaboration between the NMDOT, the City of Las Cruces, and NMSU, a makeover to upgrade the interchange was due. This specific project, dubbed the I-25 University Ave. Project LC00250, included a direct connection from I-25 to the NMSU campus via a new bridge on University Ave. which allowed the interstate southbound off-ramp and Triviz to pass directly under University Ave.

“This project created safer traffic flows in and around I-25 and University Ave. and created a direct link into the NMSU campus,” said Dolittle. “The new interchange also provides alternative routes into the City and interstate system. It encourages more people to walk or bike by linking the existing trails in the area, as well as strengthening protections for pedestrians and bicyclists who use these trails. Finally, it improved local traffic flow on Triviz under University through use of two roundabouts rather than a signalized intersection.”

Breaking ground in Jan. 2020 and finishing up in Oct. 2021, the project creates a safer interchange that allows for better traffic flow and promotes multiple forms of transportation from commercial truck traffic to pedestrians. The upgrades improved access for commuters and special events traffic by getting rid of backups onto the interstate and local roadways. 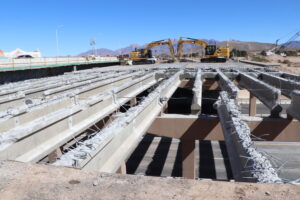 Additionally, one of the more innovative design features this project implemented was the double roundabouts. Since the interchange serves as a gateway into Las Cruces and NMSU, the roundabouts were used to provide continuous traffic flow as it helped prevent backup onto the interstate. The project also connected a city street straight into NMSU. This helped relieve traffic at an existing signal.

As far as challenges, the collaboration team had to build this project out while also keeping two lanes of traffic open at all times. Being adjacent to the NMSU event center and football stadium only added more traffic to the project. Communication between the contractor crew and traffic control contractor had to be crisp, in addition to public notification for any updates.

The project was built with environmentally conscious or energy-efficient aspects via Envision, which is a rating system that was developed by the Institute of Sustainability. Similar to LEED but intended for infrastructure, Envision has 64 credits over 5 categories that include Quality of Life, Natural World, Leadership, Resource Allocation and Climate and Resilience.

“Our team was able to incorporate small things into the design of the project to greatly improve the sustainability of the overall project.” Trent Doolittle, District 1 Engineer, NMDOT

“The NMDOT has taken a lead in providing sustainable design and construction practices for many years without any real measure of the effectiveness,” said Dolittle. “Our team was able to incorporate small things into the design of the project to greatly improve the sustainability of the overall project. Some examples of this are demolition materials were recycled for use in backfill for the construction of Mechanically Stabilized Earth (MSE) walls, recycled asphalt pavement material for paving, balancing the earthwork, and the use of high-efficiency LED lighting was installed to reduce light scatter.”

Like with any infrastructure project, community involvement was vital. In addition to public input meetings during the early stages, the project team implemented a web page, social media accounts, email blasts and radiation and television advertisements to keep the public informed.

“With all major construction builds in metropolitan areas, public meetings were included with the project. This team was prepared to hold in-person monthly public meetings to keep the community involved with the construction and traffic impacts,” said Dolittle. “Monthly pre-recorded project information was aired on the local TV station, and public meeting attendance skyrocketed from under 100 to over 5000. This allowed project information to be distributed timely and efficiently.”

According to the project team, other New Mexico projects looked toward the I-25 University Ave. project as the blueprint for implementing a statewide public outreach program.

As a result of the finished product, the project received recognition via the Envision Silver Award for sustainability. According to the team, this project was the first in the state of New Mexico to meet the ENVISION requirements. As far as other achievements, the project was also deemed the Best of New Mexico for City Street, New & Reconstruction by the Asphalt Pavement Association of New Mexico. Additionally, the project also earned the 2022 Engineering Excellence Award from the American Council of Engineering Companies New Mexico.

Camille Manaloto is the Editor of American Infrastructure. She can be reached at camille@builder.media. 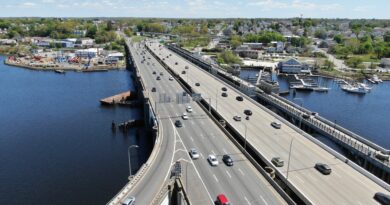 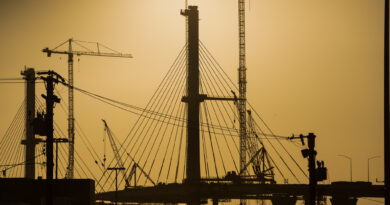