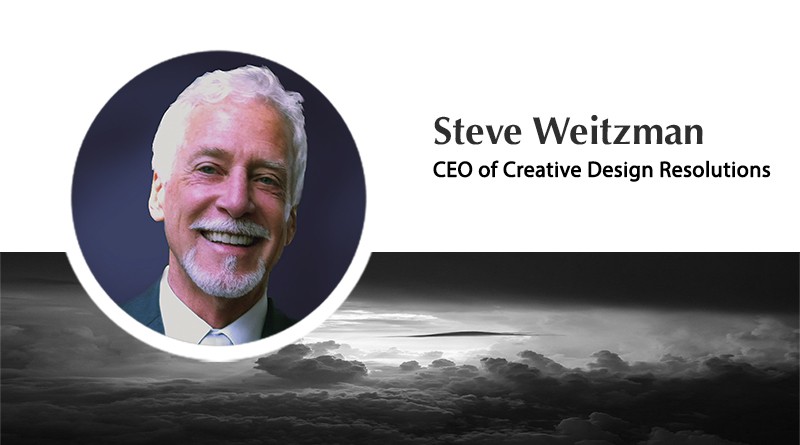 When discussing aesthetics with DOTs around the country, I have found that their concerns about costs are at the forefront of our conversations. Since funds to create these transportation projects are very limited, their focus tends to begin and end at safety and functionality. These concerns are not lost on me. It is absolutely one of the prime influencers that drives our conceptual design process. It prefaces questions I ask myself, such as: where will aesthetics be placed? How will these effects be made with a limited budget? Will they be integrated into the standard construction process or added onto the structures post-construction?

In my conversations with engineers and DOT administrators, I often explain why the simplest and most economical way to incorporate aesthetics into their projects is by doing so within the standard construction means and methods. Let’s say you are building an interchange that necessitates the casting of piers, abutments and ramp walls. Augmenting the architecture of these components to be more aesthetically pleasing or contextually themed uses money already set aside in the construction budget for concrete and form liners. How? Every state calculates the cost of a square yard of concrete to be cast for project estimating purposes. Each component to be poured has a unit cost that has already been established by their procurement office and accounted for within the breakdown of that square yard of concrete, such as: cement, aggregate, water, superplasticizer, labor, reinforcement, forms, and form liners.

So, let’s say a contractor is planning to bid on pouring an ashlar stone effect on a cast-in-place wall. Most likely, they will try to get the least expensive, plastic, throwaway form liners, such as SBS (1–3 uses per liner) or ABS (4–8 uses per liner), which usually cost about $8–$12 per square foot. This means that contractors can only use each plastic throwaway liner up to eight times before throwing it away, purchasing a new one and repeating this process until the job is complete. Alternatively, since the cost of a form liner is already included within the budget for a square yard of concrete, engineers can approach their projects in a slightly different way by specifying urethane-rubber liners instead. Although these liners will cost somewhere between $39–$55 per square foot, they will yield between 50–100 uses per liner which ends up costing less per individual pull.

It is not unusual for the life expectancy of a urethane-rubber form liner to exceed the needs of the job it is designed for, which offers an added bonus. Considering that the DOT owns the project, and subsequently the liners as well, they can choose to keep them for future use. Many states are catching on to this trend and deciding to retain, inventory, and reuse their urethane-rubber form liners to be used on multiple projects, amortizing the initial investment price over each usage. They essentially check the form liners out to a contractor and back in again very much like a library book, saving on the costs to make patterns and form liners since they do not need to purchase new ones. An added benefit is that you reduce the amount of waste and landfill as well.

Another example of finding cost savings in standard construction practices would be exemplified in the forming of a parapet. If contractors are planning to cast-in-place, designers could create an aesthetic pattern that repeats across the bridge spans. For example, if the bridge was 150’ long with 30’ spans from pier to pier, the contractor will only need to purchase enough urethane-rubber form liners to cover those 30’ for the entire bridge. Even if the other parapet sections are smaller than 30’, the contractor can always block off the difference in those forms, before pouring.

Another area where function can intersect with form is in lighting requirements. Light standards are often simply utilitarian and one of the last things on an engineer’s mind when designing a structure. LED lights are now common throughout the industry. This is due to their longevity and subsequent cost savings, in addition to their infrequent maintenance needs. In addition, there is a minimal cost difference between using a full-color spectrum LED light versus a standard white LED light, which will enable you to easily enhance your project with little effort and cost. Therefore, when designing a project that requires a light standard that is intended to bring attention to its location, why not consider using full-color LED lighting effects that support the context and desires of the clients and their constituents?

There are numerous ways to integrate economical aesthetics that capture cost-savings during design phases as well. Consider, for example, you are designing an MSE ramp wall with hexagonal panels and your state insect was a honeybee. You can easily animate the entire ramp wall to look like an active honeycomb by merely keeping the majority of the wall blank and using one form liner that creates a honeybee relief, repeated in just a few locations within the composition of hexagonal MSE panels. Now that’s economy in design! 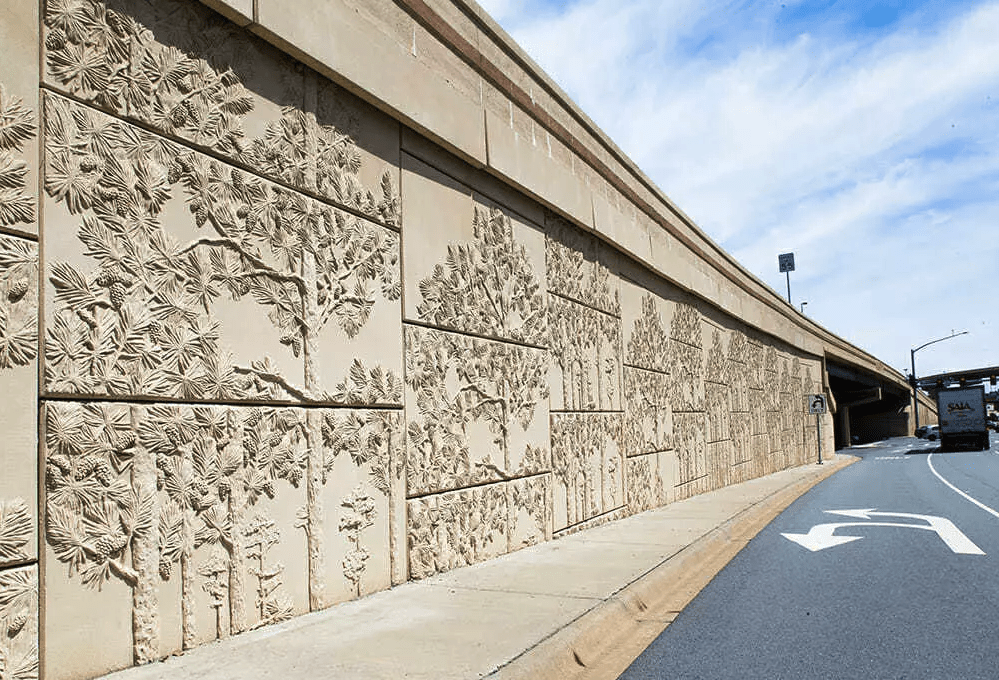 The clever and national award-winning Big Rock Interchange project in Little Rock, AR. utilized only five unique patterns, and their subsequent form liners, to create a noteworthy effect across 240,000 square feet of MSE ramp walls. The few custom patterns that were reorganized throughout their interchange ramp walls created a unique forest of loblolly pine trees, the Arkansas state tree. The same can be done when casting sound barriers, such as the designs for Howard County’s MD 216 sound barrier walls. These panels feature a forest of trees indigenous to the state of Maryland, as well as geese flying in the sky and clouds, which are all reconfigured and registered against one another to create unlimited design possibilities, using the same handful of reusable form liners. 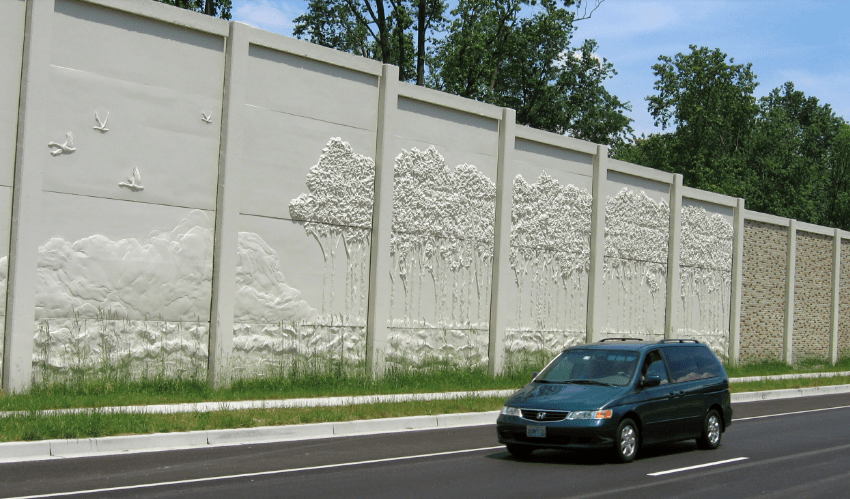 Water mitigation is another valuable way to save money. This is quite effective on large bridge surfaces, such as single-point urban interchange (SPUI) bridges. Rain water always needs to be addressed somehow and if a significant amount of water is captured by the bridge, a costly pump station will have to be built only to waste the water by pumping it directly into the sewage system. Instead, if this is determined ahead of time, engineers can create a water mitigation retention pond to receive that water. This area can become a green oasis by planting indigenous plants and trees in that location which will soften the hard edge of the concrete structure behind it and even encourage birds and butterflies to visit the pond area. I hope these examples have inspired you all to pay attention to the creative ways you can use cost savings that are pre-existing in your budget to incorporate meaningful aesthetic components into your infrastructure projects.

Steve Weitzman is the CEO of Creative Design Resolutions. Learn more at creativedesignresolutions.com 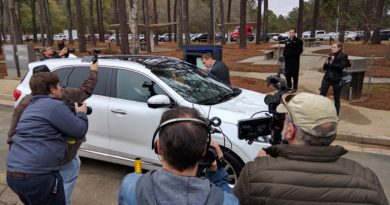 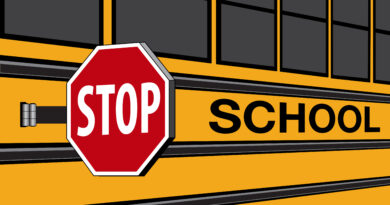