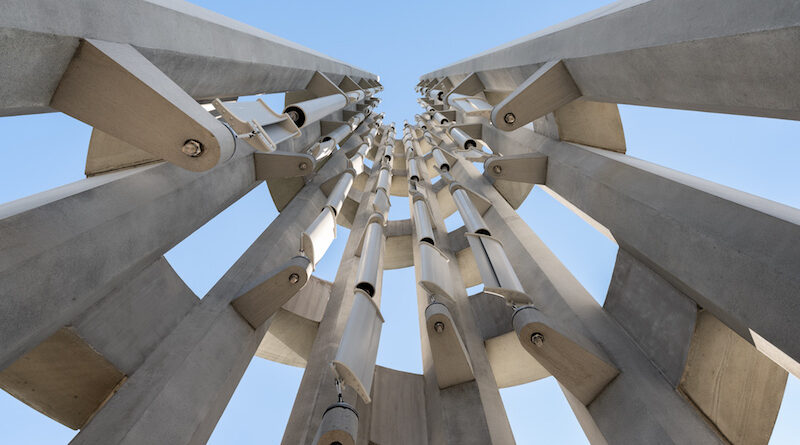 On Tuesday morning, September 11, 2001, the United States came under attack when four commercial airliners departing from airports on the East Coast were hijacked and used to strike targets on the ground. After a delayed departure, United Airlines Flight 93 carrying 33 passengers, 7 crew members and 4 hijackers departed Newark International Airport in New Jersey en route to San Francisco, California. Approximately 45 minutes into the flight, the plane changed course near Cleveland, Ohio, and was redirected southeast toward Washington, D.C. After action was taken by the passengers and crew members to overtake the hijackers, Flight 93 crashed a few minutes after 10:00 a.m. into a reclaimed coal strip mine near the town of Shanksville in Somerset County, Pennsylvania. All persons on board were killed and an attack on the nation’s capital was prevented.

The Flight 93 National Memorial is a 2,200-acre national park site commemorating the heroic actions of the 40 passengers and crew who prevented a terrorist attack on our nation’s capital. The Advisory Commission selected the design proposal of the submitting team from among 1,100 entries. The design transforms the site, a former reclaimed strip mine, to a memorial landscape of environmental and symbolic healing.

Every aspect of the landscape works to repair the damaged land and water – from the restoration of meadows and wetlands to the remediation of soil and the planting of diverse native tree species. The complexion of the memorial landscape is intended to change over time and seasons.

The memorial landscape moves visitors through a composition of open spaces defined by site walls, plantings, walkways and courts, gateways and building elements. At the heart of the memorial landscape is a large bowl-shaped field that used to be an open-pit coal mine and is now the Field of Honor.  Along the perimeter, memorial features include the Visitor Center, located between two ascending concrete memorial walls that are aligned with the flight path; 40 Memorial Groves with a Red Maple allée; the Wall of Names and Memorial Plaza, the Arrival Court and Gateway, the restored Wetlands; the Sacred Ground; and the Western Overlook. In shaping the topography and framing the open space with a distinct, formal edge, the memorial design presents and expresses, as a Field of Honor, the spirit of the Mission Statement preamble:  A common field one day. A field of honor forever.

The plane crashed at the edge of this open field in front of a grove of hemlock trees, burning many of the trees. The distinct structure of the trees, with their straight, tall trunk and alternating angled branches, is the inspiration for the design motif expressed in materials throughout the memorial. This Hemlock Grove that absorbed the inferno of the crash is the backdrop to the crash site, the focal point for the entire memorial experience.

Upon entering the park, visitors first see the Tower of Voices that marks the gateway to the Memorial site and symbolically introduces the memorial theme. Rings of White Pine trees resonate from the tower, with flowering Hawthorn and Redbud trees and additional species partially screen this area from the site entrance and Approach Road.

The wind-activated, 93-foot-tall Tower of Voices required an unusual combination of consultants, including a musician, chimes artist, and acoustical 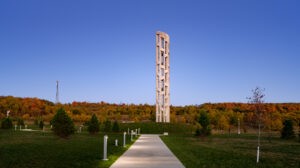 engineer. wind consultants, sail designer, and design process. The scale and complexity of 40 chimes, and the variability of wind directions and velocities, required an int

eractive process of testing and simulation for determining a final design. This required musical tuning theory to establish the right tones, chime mock-ups for 3D recordings, computational fluid dynamic modeling to test tower shapes, wind tunnel testing to simulate site conditions and acoustic simulation in a sound lab to digitally test chime configurations in final tower volumes to create the full effect of all chimes together.  And the sail designer (Nord Embroden) was brought in later in the game to offer his expertise. This is believed to be the largest wind-driven chime in the world. The Tower of Voices commemorates the forty passengers and crew who passed through a living memorial in sound to remember their ongoing voices.

Nearly two decades in the making, the memorial design expresses the convergence of the land’s beauty and power with the strength and sacrifice of heroic, personal action on September 11 that give the memorial site its unique sanctity.

This is the first new US national park in the 21st century.

The first phase, dedicated in 2011, included the entry road, re-grading of the large field of honor, and the memorial features adjacent to the crash site.

The second phase, dedicated in 2015, includes the visitor center within enclosing memorial walls, an entrance walkway along the flight path, a comfort station and learning center, parking, trails, commemorative trees and a pedestrian bridge over restored wetlands.

The final major phase included the Tower of Voices, a 93-feet tall chime tower near the park entrance.

The project transforms the brownfield site, a former reclaimed strip mine and industrial scrap yard, into a 2,200-acre memorial landscape for the public. Healing the land sustainably is a metaphor for emotional healing by experiencing this commemorative setting. Therefore, sustainable design strategies take on multiple dimensions; historic, poetic, symbolic, experiential and biological.

Design of the memorial is integrated at all levels for a seamless visitor experience in a choreographed sequence of commemorative, cultural and natural spaces:

The backfilled field where an open-pit coal mine operated for decades has been re-graded and formalized with a circular-shaped red maple allée and 40 memorial groves with a mix of native trees. Soil amendments treat the mining spoils to facilitate healthy tree assimilation and growth. Outside the zone of commemorative trees, volunteers continue to plant over 170,000 native reforestation trees, including reintroduction of the American chestnut once prevalent in local forests. The maple-lined path that lines the edge of the field extends from the visitor center down to a pedestrian bridge crossing a restored wetlands habitat that serves as a natural threshold before arriving at the crash site.

Daylight is used in the visitor center to connect visitors to the natural and commemorative landscape, so the story told in the displays always has a direct connection with the site. Cast-in-place concrete walls (for durability and cost-effectiveness) and black-stained precast panels at the interior feature a finish made from 150-year-old recycled Pennsylvania barn timbers. This creates a symbolic connection with the hemlock grove down the hill that absorbed the impact at the crash site.

Archival material in the exhibits required low light levels. Rather than exhibit within a “black box,” eight different glass types, studied through a digital daylight model, respond to the various exposures to enhance building performance while mitigating negative effects on the exhibits. This careful location of building apertures and high-performance glazing of various types allows the interior to be visually connected with the memorial landscape and its many moods, promoting personal reflection.

Recycled aluminum radiant ceiling panels, a variety of high-performance glazing types and hemlock wall panels all contribute to the story and sustainability of the project. 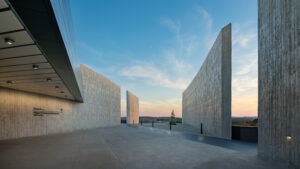 The site presented significant challenges for stormwater management due to previous mining activity. All stormwater displaced by building and hardscape footprints needed to be diverted to a system of designed retention ponds to keep storm water from infiltrating mining soils and creating acid mine drainage. Existing mitigation ponds will continue to clean the water over time to surpass minimal environmental quality standards. Wetlands were restored and enlarged to create a natural separation between the commemorative groves and arrival at the lower memorial plaza.

As part of the extensive management system throughout the park, storm water at all parking areas is captured in landscaped bioswales and reused for flushing water closets at the visitor center complex, stored in ponds for temporary irrigation during establishment periods and as reservoirs for fire protection. To reduce water use, the buildings use efficient fixtures such as waterless urinals, low flow faucets and water closets. Water efficient landscaping includes native plant materials that require no permanent irrigation. Through site and building measures, the visitor center uses less than half the water of a baseline facility.

The overall design approach of the memorial is to encourage visitors to experience the natural, historic, and commemorative places throughout the park by walking through a spatial sequence of trails and designed places. The active engagement of walking in this setting allows each person the time and space to come to terms with the events that occurred on 9/11 and to reflect on the impact of those actions. Besides the health benefits of walking in a park, the exposure to emotional and spiritual healing is the main wellness goal, through an evolving landscape that is designed to heal over time.

The Partners of Flight 93 collaboratively developed a planning process, a mission statement to guide all development and management decisions, a competition process for selecting the memorial design and participated in the project’s design development over the last fifteen years. The four partner organizations are:

In addition to visitors, the community can use the trails and choreographed walking experience of the memorial landscape as active open space.

Paul Murdoch is a Los Angeles based architect.

Republic of Thirst, Part 2: The Sites Reservoir and the Future of Water Storage

How 3 U.S. Cities Are Adapting To Climate Change